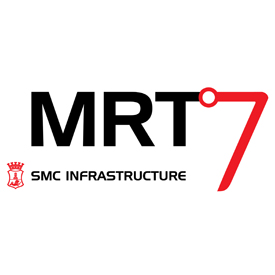 The Manila Metro Rail Transit System Line 7 (MRT-7) is an under-construction rapid transit line in the Philippines. When completed, the line will be 22.8 kilometers long serviced by 14 stations. The line runs in a southwest direction, beginning at San Jose del Monte, Bulacan up to the under-construction Unified Grand Central Station located in North Avenue, Quezon City. MRT Line 7 will traverse Quezon City and Caloocan in Metro Manila, and is envisioned to spur business and commerce at its inter-modal terminal station in San Jose del Monte, Bulacan. According to the PPP Center website, the project is 22.63% complete as of January 26, 2018.

Background
Universal LRT Corporation BVI (ULC), a subsidiary of San Miguel Corporation (SMC), was selected by the Department of Transportation and Communications to build the MRT Line 7 in 2008. SMC tapped the consortium of Hyundai Rotem and EEI Corporation as the engineering, procurement and construction contractor. The Department of Finance issued the terms of financial guarantee for MRT-7 in 2014, and financial closure for the project was achieved in February 2016.[4] The project was developed through a public-private partnership (PPP) and it has an indicative cost of ₱62.7 billion.

The new line will include a 22.8 kilometer of a mostly elevated railway line with 14 stations. The project also includes construction of a 22 kilometer highway from the NLEX Bocaue Interchange, up to the proposed intermodal transport terminal located near San Jose del Monte station.