NDMS Trading opened business on October 1993 during the years when Engr. Nolando B. Sanchez  was still the Municipal Engineer of Sto. Tomas, Batangas.  It had five regular employees and is taking office space in their house at San Agustin, Sto. Tomas, Batangas.   The company’s principal products and services were delivery of any kind of construction materials like gravel and sand.  When the company started contracting government projects it pave the birth of WMLC Trading and Construction Supply under the sole management of Engr. Wilfredo E. Carpio since Engr. Sanchez had to render full time job at the Municipal government.

The merging of NDMS Trading and  WMLC Trading and Construction Supply – started in year 2000 as a company catering to road projects, house and building construction, delivery of aggregates, trucking business and rental of different kinds of construction equipments. It has 35 regular employees and hundreds of contractual workers for deployment to various project locations.  Year 2008 when Engr. Sanchez decided to go back managing his business up to present.  Awaiting the release of the upgraded PCAB license he plans on  buying out the merged NDMS Trading and WMLC Trading into putting up NDM Sanchez Builders and Development Corporation with SEC Certificate no. CS201011193.  The main office and motorpool is situated within a 5,447 sq. meter lot in San Agustin, Sto. Tomas, Batangas

His personal investments include the following:

He also owns SMS Apartelle, with a market value worth amounting to Twenty Eight Million Pesos which started construction on January 2007, a 12-door three storey two bedroom apartment located in a 448 sq. meter lot  in  Mt. Claire Subdivision, Sta. Anastacia, Sto. Tomas, Batangas.  The apartments were ready and opened for rental on May 2008.  At present, all units are being occupied with a  monthly rental of P12,000.00.

Another development project he fully owns is St. Anthony Eternal Garden under NDM Sanchez Builders & Development Corporation, which started construction on  January 2008.  It has a total land area of 2.6 hectares  located in Poblacion, San Antonio, Quezon and is worth Fifty Million of assets and construction materials to date for the First Phase which is now on half completion.  The remaining phase will be developed soon as sales of the Phase 1 lots are going up.

He is one of the Board of Directors of Buenos Aires Construction and Development Corporation with principal office address  at 2/F Gloria Galleria Bldg., Mabini Ave., Tanauan Batangas, it started on 24 December 1998.  Presently, it has a land development project named  Le Clermont Villas located in Brgy. Balimbing, San Pascual, Batangas.  It has a total expenses amounting to Fifty Five Million as of June 2009 and is still ongoing. 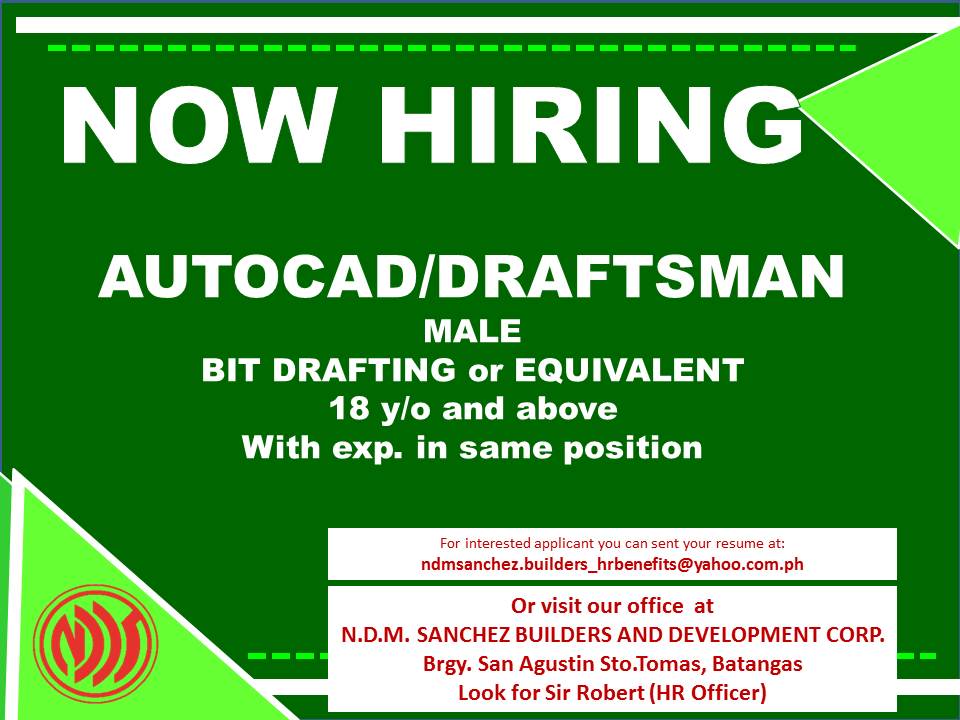 Get notified for NDM SANCHEZ BUILDERS AND DEVELOPMENT CORPORATION Jobs

Do you want to be the first to know about the latest jobs at NDM SANCHEZ BUILDERS AND DEVELOPMENT CORPORATION? Just subscribe with your email address and we’ll send you alerts as jobs become available.